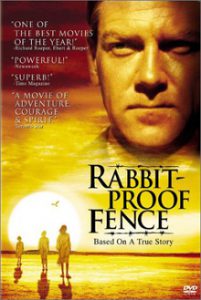 The film takes place in Western Australia, 1931. Government policy includes taking half-caste children from their Aboriginal mothers and sending them a thousand miles away to what amounts to indentured servitude, “to save them from themselves.” Molly, Daisy, and Grace (two sisters and a cousin who are 14, 10, and 8) arrive at their Gulag and promptly escape, under Molly’s lead. For days they walk north, following a fence that keeps rabbits away from the settlements, eluding a native tracker and the regional constabulary. Their pursuers take orders from the government’s “chief protector of Aborigines,” A.O. Neville, blinded by Anglo-Christian certainty, an evolutionary world view and conventional wisdom.

The film is loosely based on a true story concerning the author’s mother Molly, as well as two other Aboriginal girls, Daisy Kadibil and Gracie, who escape from the Moore River Native Settlement, north of Perth, Western Australia, to return to their Aboriginal families, after being placed there in 1931. The film follows the Aboriginal girls as they walk for nine weeks along 1,500 miles (2,400 km) of the Australian rabbit-proof fence to return to their community at Jigalong, while being pursued by white law enforcement authorities and an Aboriginal tracker. The film illustrates the official child removal policy that existed in Australia between approximately 1905 and 1967. Its victims now are called the “Stolen Generations”