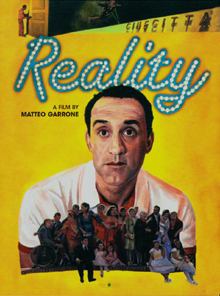 Reality is a dark comedy centering on the lives of a Neapolitan based family whose father, a fish merchant, is so infatuated with the reality TV show “Grande Fratello” (the Italian version of “Big Brother”) that he starts living his life as if he were on it.  Gradually, the mythic function of Reality TV serves as a source of spiritual awakening for Luciano (Aniello Arena). Deluded by the expectation that he might be chosen for Italy’s Big Brother and intoxicated by the allure of fame, Luciano quickly pivots and begins to lead a benevolent life, partaking in charity and rejecting material goods to please the executive producers of the show.  He begins to give small gifts to the poor of the city, then spends large amounts of money giving away more expensive items, such as furniture, from his house.  Finally, he makes a pilgrimage to Rome, and becomes obsessed with studying for his part in Big Brother, which is now his only reason for living.

The final shots of Reality are poignant and haunting. We stalk Luciano (the camera shadowing his hypnotized gait and gaze) as he stares through the glass window of the Big Brother set in awe, as if unctuously admiring angels from afar. Transfixed, he touches the glass, seduced by the sublime proximity of false transcendence. Finally, demented by desire to enter the forbidden territory, he walks onto the TV set with the incredulity of a Doubting Thomas, and sinks onto a sofa chair (plush as a throne): the omnipresent video cameras intimately capturing this symbolic transgression.