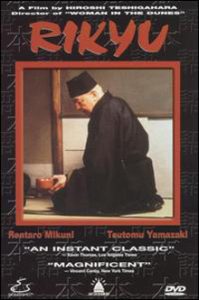 In 16th century Japan lives Rikyu (Rentarô Mikuni), a Buddhist priest who believes in the spiritual healing inherent in the traditional Japanese tea ceremony. When this man of peace sets out to teach this intricate ritual and its philosophies to Hideyoshi (Tsutomo Yamazaki), a powerful shogun, the two men develop an unlikely friendship. However, when Hideyoshi’s blind ambition urges him to invade China, their bond is threatened as this soft-spoken monk raises his voice in dissent.  This one breach of Rikyu’s studied isolation from world affairs leads quickly to tragic consequences.