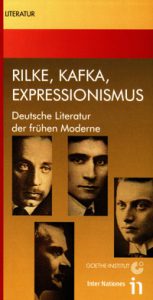 This film describes the literature of Expressionism at the beginning of the 20th century. The authors Franz Kafka and Rainer Maria Rilke, as two of the most important representatives of this literary period, are the focus of this documentary. In an imaginary background story, Dagmar and Jana, who are planning a literary excursion for a travel agency, take us from Munich to Prague. This journey is at the same time a journey into the intellectual world of literature at the beginning of modernity.  (In German)