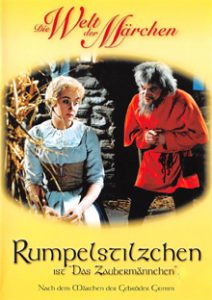 As a result of miller Kinz’s boasting, his daughter Marie has become a prisoner in the King’s castle. Kunz had claimed that she could spin straw into gold, and so the King decided that he would use her unusual talent to fill his empty coffers. Marie, unable to actually spin straw into gold, has no idea how she will free herself from the dire circumstances that have befallen her when all of a sudden a little man appears, offering to spin all of the straw into gold for her. In exchange for his help, however, he requires that she surrender to him her firstborn child. After a year, Marie, now the wife of the king, brings her first child into the world. Suddenly the little man appears, demanding his payment. Marie implores him to let her keep the child despite their agreement. The magnanimous little man agrees to give up his claim to the child on the condition that she is able to guess his name.