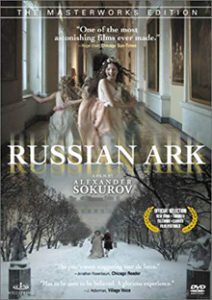 On a winter’s day, a small party of men and women arrive by horse-drawn carriage to a minor, side entrance of the Winter Palace of the Hermitage in St. Petersburg, dressed in the style of the early 19th century to attend a ball hosted by the Emperor Alexander I. The narrator (whose point of view is always in first-person) meets another spectral but visible outsider, “the European,” and follows him through numerous rooms of the palace. “The European”, a 19th-century French diplomat who appears to be the Marquis de Custine, has nothing but contempt for Russians; he tells the narrator that they are unable to create or appreciate beauty as Europeans do, as demonstrated by the European treasures around him. Each room manifests a different period of Russian history, although the periods are not in chronological order.

As the two travel through the palace and its grounds, they interact with people from various eras of Russian history, either through events that have happened at the palace or through the viewing of artifacts housed in the museum. The European tells the narrator that he belongs here, in the world of 1913 where everything is still beautiful and elegant, and does not want to go any further. The narrator then walks backwards out the hallway and sees many people from different time periods exiting the building together. As he watches them, the narrator quietly departs the procession, leaves the building through a side door and looks out upon an endless ocean. Ultimately, his desired journey is to move forward, with or without his European companion.