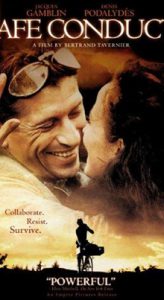 In 1940s Paris, during the German occupation, two men in the film industry find different ways to deal with the Vichy regime stifling their creativity. Jean Devaivre (Jacques Gamblin) is an assistant director, and Jean Aurenche (Denis Podalydès) is a screenwriter. Devaivre actively rebels against the occupation: He is an employee of Continental, a Nazi film company, but secretly fights in the resistance. Aurenche, on the other hand, refuses to create propaganda while working for the company.  The film is based on the memories of the veteran French director Jean Devaivre, active in the film industry and the resistance during the Second World War.