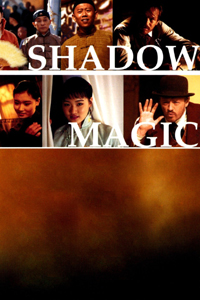 Shadow Magic is a historical fiction film about the introduction of motion pictures into China during the early 20th century.  The film is set in Beijing, 1902, in the last years of the Qing Dynasty. A young portrait photographer, Liu Jinglun (Xia Yu), chances upon a newly arrived Englishman, Raymond Wallace (Jared Harris) in the capital. Liu, a self-learner of rudimentary English, is keen on new technology and gadgets, while Raymond has brought along the latest motion picture camera and projector with some silent film shorts from the West. Liu is fascinated by the “shadow magic” and offers to help Raymond bring in audiences for his theater. Thus, Liu and Raymond become partners. However, while the innovation thrills many, the more conservative Chinese in the capital frown upon the creation as a Western “pollutant.”

Liu falls in love with Ling (Xing Yufei), the daughter of a well-respected Beijing Opera star, Lord Tan (Li Yusheng). However, as he is poor and only an apprentice at the photography shop, Liu has no chance of marrying Ling.  When Master Ren, Liu’s boss, finds out that Liu has been working for a foreigner dabbling with “shadow magic,” he becomes infuriated. Liu tries to reason with Master Ren, explaining to him that this “shadow magic” is an innovation in the world of photography, and once Liu learns more about it they should incorporate it into their own business. Master Ren is not swayed, however, and dismisses him. Because of this, Liu is also disowned by his father. Liu and Raymond’s friendship becomes tested as he feels the strain of being branded a traitor in his own country.  The film ends with the Beijing natives gradually accepting the motion picture technology, once they see how beautifully it captures the majesty of the Chinese landscape.