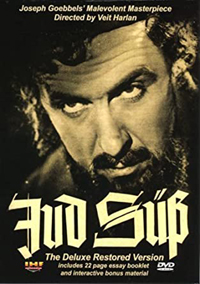 Jud Süß is a 1940 Nazi German historical drama and propaganda film produced by Terra Film at the behest of Joseph Goebbels. It is considered one of the most antisemitic films of all time. The film was directed by Veit Harlan, who wrote the screenplay with Eberhard Wolfgang Möller and Ludwig Metzger.

Long recognized as history’s most incendiary film, Jud Süß was the cultural centerpiece in Joseph Goebbels’ campaign against the Jews. Released in 1940, it was a box office sensation across Germany and Europe; alongside the movie’s theatrical distribution, it became a staple of Nazi propaganda evenings organized by the Hitler Youth, SS and others. At once a rousing melodrama and murderous antisemitic incitement, the movie draws loosely from historical events from the early eighteenth century, when “Jud Süß” Oppenheimer, financial advisor to the Duke of Württemberg, was subjected to a sensational trial and gruesome execution. The film depicts Süß as a figure of cynical cunning and malign will, a sexual predator sowing corruption everywhere; his promotion of Jewish emancipation brings Christian Württemberg to the brink of moral and social ruination. That these qualities are conveyed through Ferdinand Marian’s stunningly charismatic performance as Süß suggests something of the film’s disturbing power.  Even as it acknowledges Jewish misery, Jud Süß argues for still more lethal, pitiless solutions to the “Jewish question.” A key historical document of the twentieth century, Jud Süß remains a deeply unsettling cinematic experience.