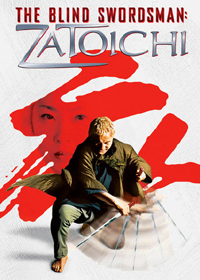 The film’s plot follows a traditional theme, with Zatoichi (a blind swordsman) coming to the defense of townspeople caught up in a local yakuza gang war and being forced to pay excessive amounts of protection money. Meanwhile, Zatoichi befriends a local farmer and her gambler nephew and eventually offers his assistance to two geisha siblings (one of whom is actually a man) who are seeking revenge for the murder of their parents. The siblings are the only survivors of a robbery and massacre that was carried out on their family estate ten years ago. They soon discover the people responsible for the murders are the same yakuza wreaking havoc on the small town.

After slicing his way through an army of henchmen with his sword, Zatoichi defeats the yakuza’s bodyguard, a powerful rōnin, in a duel. Zatoichi later wanders into town and confronts the yakuza bosses, killing the second-in-command and blinding the elderly yakuza boss (who had been masquerading as a bumbling old waiter up until this point) after surprising him by opening his eyes. The film ends with a dance number led by noted Japanese tap dance troupe The Stripes, and Zatoichi walking down a trail and tripping over a rock, saying “Even with my eyes wide open, I can’t see anything.”