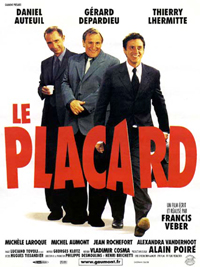 Francois Pignon (Daniel Auteil) is a mousy, grey, drab accountant,working in a condom factory, who can’t even get in the company picture. He overhears, while in the bathroom from the chief of personnel (Gerarad Depardieu) that he will be laid off. Depardieu is also the coach of the company rugby team, a homophobic macho maniac.  Everybody seems to know that Pignon is getting canned but him.  While trying to kill himself by jumping out of a window, his new neighbor stops him. “It’s my car down there, you’ll wreck the roof.” His neighbor, an industrial psychologist, hatches a plan to save Pignon’s job. He alters some gay pictures to make it seem that Pignon is gay. He cannot be fired anymore, or the company, with a large gay clientele would suffer a public relations nightmare.  He does not change anything in his life. His words, his actions, are exactly the same, but the reactions of everybody in his life change dramatically. His ex-wife, (Alexandra Vandernoot) who won’t even take his calls, now answers the phone. Even his son, who refuses to dine with him because he is so drab, finds him interesting and cool after seeing him in the gay pride parade.  The whole movie is a study in reality vs perception, with a comic French touch that will have you laughing out loud.