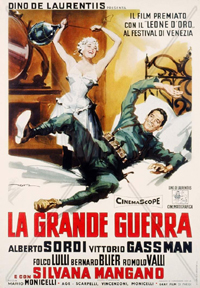 The Great War is a 1959 Italian comedy-drama war film directed by Mario Monicelli. It tells the story of an odd couple of army buddies in World War I.  Although the movie is played on a comedic register, it does not hide from the viewer the horrors and grimness of trench warfare. Starring Alberto Sordi and Vittorio Gassman and produced by Dino De Laurentiis, the film won the Golden Lion at the Venice Film Festival. Its crew also included Danilo Donati (costumes) and Mario Garbuglia (set designer).

The film was an Academy Award nominee as Best Foreign Film and in 1999 the critics of Ciak magazine chose it as one of the 100 most important films in history.  It became a huge success outside Italy, especially in France.