The House on Chelouche Street 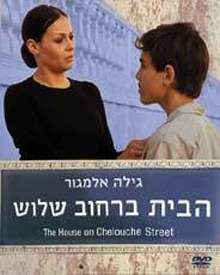 The film tells the story of a family of Egyptian immigrants that settle in 1947 Tel Aviv. The family consists of a widowed wife (played by Gila Almagor) and her four children. The plot centers on the firstborn, Sammy, his transition from a shy 15 year old to a working man and an activist in the “Haganah”, and the romantic attachment he develops with a 25 year old Russian immigrant librarian (Michal Bat Adam). The movie is a vivid and very credible description of Egyptian-Jewish families on the eve of the declaration of the state of Israel.

In 1947, after the death of her husband, Clara (Gila Almagor) and her Egyptian family settle into a crowded one-room apartment in Tel Aviv, Israel. Her son, Sami (Ophir Shalhin), is bright and has a fondness for reading, but is so upset over his mother working as a maid that he drops out of school to find factory work and help support the family. He soon finds himself swept up in a strike and embraces his newfound role as an activist, even though it could mean arrest by British police.