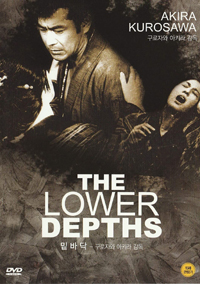 Residents of a rundown boardinghouse in 19th-century Japan, including a mysterious old man and an aging actor, get drawn into a love triangle that turns violent. When amoral thief Sutekichi breaks off his affair with landlady Osugi to romance her younger sister, Okayo, Osugi extracts her revenge by revealing her infidelity to her jealous husband.

Akira Kurosawa, one of cinema’s greatest directors, transforms Maxim Gorky’s classic proletariat play The Lower Depths in his own way for his own time. Kurosawa, firmly situated in the postwar world, found little reason for hope. He remained faithful to the original with its focus on the conflict between illusion and reality—a theme he would return to over and over again. Working with his most celebrated actor, Mifune, his film offers a unique look at cinematic adaptation—where social conditions and filmmaking styles converge to create a unique masterpiece.