The Master and Margaret 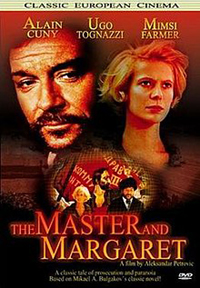 The Master and Margaret is a 1972 Italian-Yugoslav film directed by Aleksandar Petrović, loosely based on Mikhail Bulgakov’s 1940 novel The Master and Margarita.  Master, a Russian playwright, is anxiously anticipating the premiere of his new play. In the post-Revolutionary Moscow of the 1920s, the subject of the play, the encounter between Jesus and Pontius Pilate, frightens Master’s conformist peers. In the atmosphere of political oppression and officially encouraged atheism, Master’s thoughts on secular power, truth and freedom expressed through the play’s characters seem alarmingly relevant to the literary hacks of the newly instituted artistic bureaucracy. Predictably, the play is condemned, but to the aid of the anguished writer come his new acquaintances: a beautiful woman he meets on a Moscow street and a mysterious stranger apparently endowed with supernatural powers who takes a special interest in the play.  Master (Ugo Tognazzi) discovers that the mysterious professor (Alain Cuny) who is looming over his controversial work is really Satan incarnate.