The Roman Empire in the First Century – Order from Chaos 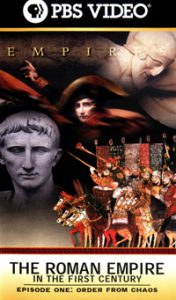 Millions of people played important parts in the remarkable history of Rome in the first century AD. Head and shoulders above everyone else stands Augustus.  Born to an unremarkable family, Augustus got a lucky break when his great-uncle, Julius Caesar, adopted him. When Caesar was murdered shortly afterwards, Augustus threw himself into the murderous mix of Roman politics.  Allying himself with Mark Antony, they killed their enemies and divided the empire between them. Augustus took Rome and Antony took Egypt, where he met Cleopatra. This made him a threat. Augustus was not prepared to take any chances and attacked first. His army destroyed most of the Egyptian fleet and Antony and Cleopatra killed themselves shortly afterwards.

Returning home, Augustus was a hero and soon became Rome’s first emperor. Abroad, he expanded the empire enormously, while domestically he played the politics carefully, using popular acclaim to reinforce his power.  Augustus was a complex man: brutal but compassionate, and austere but popular. In public, he was a religious and moral conservative, projecting himself as a pious man. In private, his daughter, Julia, was having a string of affairs.  Above all, though, Augustus was determined. When Julia’s behavior became a scandal, he banished her from Rome for life. Shortly afterwards, the famous poet Ovid published some indecent poetry: he, too, was banished for life.

Against all odds, Augustus ruled as Emperor for over 40 years, surviving plots, rebellions and mutinies. When he died, he was declared to be a god. His rule created the image of Imperial Rome that lasts to this day. He was the Emperor by which his heirs would be judged.