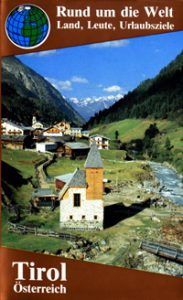 Tyrol is a western Austrian state in the Alps that’s known for its ski resorts, historic sites and folk traditions. The capital city, Innsbruck, surrounded by mountains, is home to Habsburg Empire landmarks like baroque-style Hofburg Palace and Gothic Hofkirche Church. The city’s symbol is the 15th-century Goldenes Dachl, a loggia topped with gleaming copper tiles commissioned by Habsburg Emperor Maximilian I.

Tyrol occupies 12,648 square kilometers of mountainous terrain and its history goes back to the High Middle Ages.  The deep passes of the Northern Tyrolean Limestone Alps and the Inn Valley have become significant gateways to tourism, visited primarily by German tourists, and have become a mainstay of the Austrian economy.  This film shows how Tyrol remains one of the most popular holiday destinations, and continues to be well worth the trip no matter the season.  (In German)