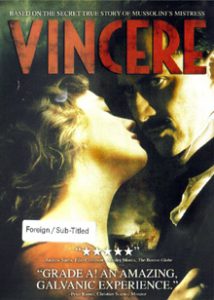 The story of Ida Dalser, who fell in love with the future Italian Fascist leader, Benito Mussolini, supported him while he was unemployed in the early 1910s, and married him, presumably around 1914. She bore Mussolini a son, Benito Albino, before the outbreak of World War I. The two lost touch during the war years and, upon discovering him again in a hospital during the war, she also discovered Rachele Guidi, who had married Mussolini in 1915, and a daughter born in 1910 when Guidi and Mussolini were living together. Historically, following his political ascendancy, Mussolini suppressed the information about his first marriage and he (through the Fascist party) persecuted both his first wife and oldest son and committed them forcibly to asylums.