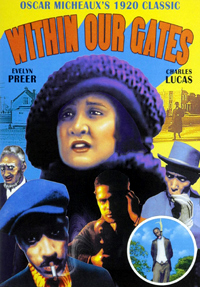 Within Our Gates is a 1920 American silent film by the director Oscar Micheaux that portrays the contemporary racial situation in the United States during the early twentieth century, the years of Jim Crow, the revival of the Ku Klux Klan, the Great Migration of blacks to cities of the North and Midwest, and the emergence of the “New Negro”. It was part of a genre called race films.

The plot features an African-American woman who goes North in an effort to raise money for a rural school in the Deep South for poor black children. Her romance with a black doctor eventually leads to revelations about her family’s past and her own mixed-race, European ancestry. The film portrays racial violence under white supremacy, and the lynching of black people. Produced, written and directed by Micheaux, it is the oldest known surviving film made by an African-American director.