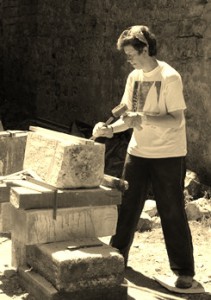 Experiential learning, a current pedagogical buzzword, is nothing new to students who spend time abroad applying their language learning to real life. It has certainly been foundational to my own studies in French since the beginning – in fact, my introduction to languages through real-life experience is what led me to study French in the first place. Memories of those travels and the resulting wanderlust also sustained me through years of frustration over little apparent progress in my learning.

In 1969, when I was eleven, my family spent a year in Edinburgh, Scotland. Neither of my parents had ever been abroad and yet they hauled four children (aged ten to sixteen) off to a land we couldn’t even imagine. We didn’t go directly to Scotland. Instead, we hit the Continent in Le Havre where, armed only with their language-requirement French from two decades earlier, my parents claimed our new Volkswagen bus. We then spent a month working our way toward Norway and, in Bergen, took the overnight ferry to Britain. Enchanted by the surprises around every bend, I quickly developed a love for the open road.  In the course of our wanderings, we met people from all walks of life who spoke two or three languages. I was mesmerized, and determined to do the same. By the time we reached Edinburgh where French was part of the basic curriculum, I was primed to learn.

Back home in Pennsylvania the next year, I was eager to continue studying French.  However, after a strong start, I “plateaued” in high school. Too shy to speak, I hid in the back row behind my textbook for three years. College courses were torture, as I understood little of what was happening in class. It might seem strange that I never considered dropping French despite seven years of agony. But how could I forget that when our conversations with Europeans had deepened, it was because they spoke our language? I wanted to repay their kindness by learning how to communicate with them on their own terms. Finally, things clicked during my semester abroad.

When I undertook graduate studies at Delaware in 1988 after teaching K-8 French for three years, I enrolled in Linguistics, envisioning a career teaching English as a second language.  I also audited French for Business in the fall, and Introduction to French Literature II in the spring. Coming to realize that I loved those courses more than my linguistics classes, I transferred into the MA program the following year. From all of the members of the French faculty at UD I learned so much, both academically and about teaching. It’s difficult to express how much I appreciated these people, many of whom became friends. They helped me change my direction in life.

By now, I’ve spent at least five years in France, walking the back roads of half-a-dozen regions, working on the restoration of monasteries and castles, picking grapes, working on a farm, teaching high school and college-level English, doing research, singing in choirs, even playing on basketball and softball teams. Each new experience raises questions in my mind, inspiring me to study more to deepen my understanding. In the process, I learn about places that I ache to see firsthand – and dig out my backpack for the next trip.

This ongoing interaction between experience and study has also shaped my teaching style. At Susquehanna University, I’m always looking for ways to turn learning into experience.  Pronunciation? Let’s perform a play for local high schools! Grammar? Let’s write modern fairy tales, turn them into illustrated books, and donate them to schools. Translation skills? Let’s submit our work to the collaborative project to translate Diderot’s Encyclopédie, international citizen journalism sites, volunteer sites, undergraduate literary magazines… Even in beginning and intermediate courses, we perform skits, write magazines, make videos, hold debates, and interview visitors from abroad by Skype. In May, a group of us will spend three weeks in France helping to restore a fourteenth-century castle near Bordeaux, learning stone-cutting and masonry in the process. In rural central Pennsylvania, we don’t have a local French-speaking population, but there are rich opportunities for experiential learning. I want to see students hunger to use their French out in the world – then deepen their experience through more study and reflection in the classroom. Together, these complementary ways of learning enrich us in so many ways, and keep human understanding at the core of education.

This entry was posted in Polyglot and tagged French, Spring 2014 Polyglot.