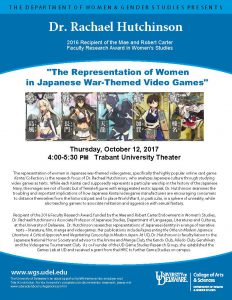 Public Lecture:  ‘The Representation of Women in Japanese War-Themed Videogames.” On Thursday October 12, 4:00-5:30 in Trabant Theater, Dr. Rachael Hutchinson will discuss the online card game Kantai Collection in the context of Japanese war games in the strategy genre. She will argue that the extreme sexualization of women in the game, coupled with the use of actual historical battleships from the Imperial Japanese Navy, adds to a broader trend of distancing war from reality. This reflects contemporary attitudes towards Japan’s role in the Asia-Pacific War, as seen in recent political developments as well as popular media.The public lecture is sponsored by the Department of Women & Gender Studies and funded by the Mae & Robert Carter Endowment.

This entry was posted in Polyglot, Special Events and tagged Fall 2018 Polyglot, Japanese.